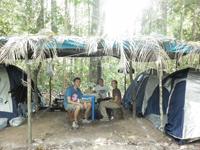 Once again it is time to bring you up to date on the latest from our research centre in the heart of the Peruvian Amazon rainforest. September has seen the continuation of the drought which has besieged the whole of South America and I cannot remember ever seeing the river so low at this time of year. All we can do is wait and hope that the rains arrive eventually bringing much needed relief to the forest and all its residents. Every morning we awake to a fine mist of smoke caused by the huge fires from large scale farms both in Peru and neighbouring Brazil and Bolivia. Slash and burn agriculture is well documented as a necessary evil for the recycling of what few nutrients are available to local farmers but I just hope that with the forest so dry that none of these fires get out of control and spread through what has become essentially a forest of kindling waiting to ignite! Needless to say, despite the unrelenting heat, there is plenty to report on as we successfully relocated the spider monkeys to their pre-release enclosure, started a new enclosure for our otter, performed a lot of necessary maintenance around the reserve and much more...

However, before considering our work in the centre I want to mention two events in which we participated this month. The first was a symposium in Puerto Maldonado hosted by the government and an organisation called AIDER which is responsible for the management of the two huge national parks located near us: Tambopata National Reserve and Bajuaja Sonene National Park. Earlier in the year I signed a convention with AIDER whereby we, at Taricaya, agreed to provide technical support and help capacitate their staff on how best to investigate and manage correctly these parks. This month there was a symposium held over two days at the local university and I was asked to provide a presentation on how biodiversity studies and continued research can be used as a tool to monitor the ecosystem whilst contributing valid data for creating effective conservation techniques. Taricaya was the case study and I demonstrated how biological data should be collected and that with correct analysis we can use this information to help better manage the reserve. In short many people do not grasp the importance of continual research or, perhaps more importantly, its significance in planning conservation strategies and long term management of whole ecosystems. We have worked hard here at Taricaya for close to 9 years now and it was incredibly rewarding to be invited to speak in front of the government officials, park directors, local press and other groups to present our work. Whilst I am not naive enough to think that the millions of hectares of Amazon rainforest under the jurisdiction of these organisations will be managed correctly from now onwards it was certainly a huge step in the right direction and the volume of questions I answered after the lecture confirmed that there is a genuine interest in what we are achieving. 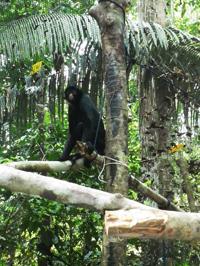 Whilst I was on a podium in Puerto Maldonado, Raul Bello was presenting our spider monkey project in Arequipa at the National Mammal Convention. As I have mentioned many times recently, no one has ever successfully reintroduced spider monkeys (Ateles chamek) into areas where they are now locally extinct. Raul, as head of our rescue centre, was the perfect person to present our work thus far and our plans as the project advances. Again our pioneering work turned many heads and this was not the only recognition of Taricaya at the convention. Biologists from all over the Americas were in attendance and, in addition to the spider monkey presentation, our old friends Hugo Zamora and Cesar Medina presented their findings on the bats and small mammals of Taricaya.

As our recognition grows and more and more people learn about Taricaya and our mission it is immensely satisfying to see the hours of hard work on the ground continued through to full fruition. The work we undertake at Taricaya is often gruelling and difficult but when papers are published or results presented the effort and dedication of everybody involved in the project is rewarded and I am not just referring to volunteers who have just left but everyone who has come and gone since 2001.

Back at the lodge itself we were working hard around the rescue centre to create a secure enclosure for our very creative otter. Whether chewing through netting or burrowing under walls our young male otter (Lutra longicaudis) has become quite the escape artist and it was time to put his skills to the test! The solution was to construct a large open cage with sturdy corrugated iron panels buried well into the ground. The slippery nature of the panels prevents him from climbing and the submerged layer discourages burrowing and with a huge new pool and a vast area to cavort in, he is incredibly happy and so far has yet to break out! The enclosure was built in record time out of necessity but it was tough work digging close to 50 metres of deep trench through baked earth and hundreds of tree roots but as expected the project became a matter of pride and was completed in record time. 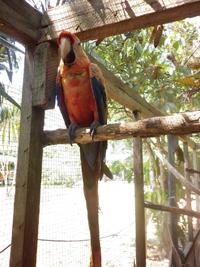 Elsewhere in the rescue centre it was finally time to move our adult troop of spider monkeys (Ateles chamek) into their pre-release enclosure deep in the reserve. This moment has been a long time in coming and after mountains of paper work, countless medical tests and extensive behavioural studies it was incredibly rewarding to move the four young adults out of the centre and into the next phase of their eventual release. As I mentioned above, this project is pioneering in so many ways and it would be truly amazing to see wild spider monkeys back in the forests of the lower Madre de Dios region. With the monkeys safely installed in their new home and initial escape efforts thwarted it was time to start the behavioural study and volunteers have been camping close to the site and carefully recording important data as our troop start to adapt to their new surroundings. At this stage the animals are still dependent on us for food and we are walking the 4km there and back twice a day to feed them but once the behavioural analysis is complete we shall start to modify their diet and get the animals accustomed to the types of fruits and seeds they should be eating in the wild. When the monkeys are completely weaned off their captive diet will we open the doors and send them back to an area where they have been missing for over 50 years! 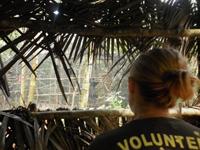 We received two new birds in the rescue centre this month also. Both are members of the parrot family (Psittacidae) but are different species with the larger being a Scarlet macaw (Ara macao) and the smaller a Chestnut-fronted macaw (Ara severus). The former is in reasonably good shape but a faded colouration would suggest a poor diet in captivity after capture whilst the second bird is in much worse shape with many broken and damaged feathers. The encouraging news is that both are feeding well and after their compulsory stay of six weeks in quarantine they will join are our other avian residents in the larger cages where exercise will allow them to build up their depleted flight muscles and regenerate the damaged feathers. 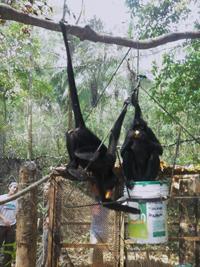 After five years of great service it was time to see us rebuild the higher platform of the canopy walkway and the observation blind located in a nearby swamp and whilst we employed carpenters for the former due to safety issues of working at 45m above the ground we still needed to get all the materials out to the site. So one of the biggest challenges we faced this month was carrying well over 6 tonnes of wood out along the trails. The work was hard and the heat stifling but in two days we managed everything and the sense of achievement almost made us forget aching backs and bruised shoulders! It was also time to buy a new boat before the onslaught of the rainy season and with the old one repaired also we are looking in great shape as our next task on the maintenance front is reopening some of the trails after heavy winds caused many large trees to fall and block the paths at many different locations.

As I received our 200th booking for 2010 earlier this month it looks like we are going to be able to push on with all our projects over the coming weeks as numbers are once again on the rise for what used to be a quieter period for us leading up to Christmas. With so many willing hands we will continue to improve the rescue centre, start an exciting new turtle house at the pilot farm, collect our baby turtles from the artificial beaches as they hatch in October, continue to monitor our spider monkeys and much more...the future looks very bright here at Taricaya and I shall bring you up to date with the latest news next time around.