This month in the rainforest has been labour intensive as we concentrated on filling the artificial turtle beaches with sand and continued to clear the extensive network of trails. It was not all sweat and toil however as we had a couple of exciting caiman hunts and some great wildlife encounters also. This all mixed in with the everyday projects based at the centre made June fly by and as numbers climb to close to thirty volunteers I am excited by how much we are achieving and the potential to accomplish even more over the coming weeks and months. The comforting problem is, as I have come to expect, where to begin? 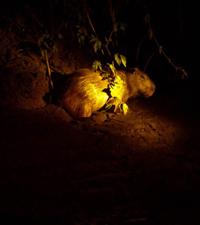 I reported last month on our expansion of the freshwater turtle project and our expectations of needing twice as many artificial beaches to house the nests we shall begin collecting next month. The actual construction of the four large box-like structures was in itself very straightforward and despite a baking sun and temperatures close to 40°C in the open area, necessary for optimum incubation conditions, the task was completed in a couple of days. Next.....filling them! I must thank all the volunteers for their industry and dedication in transferring close to 20 tonnes of sand from the river banks to the beaches. No mean task as hauling the sacks up the 25m river bank and then 200m to the beaches’ location made the work even more gruelling. Everyone played their part and as I rotated the groups around in the mornings and afternoons to give people breaks from the sun and sand flies it became a matter of pride to get the job done. Needless to say everyone rose to the challenge and it was with a huge sense of achievement and team work that we levelled off the final beach after a continuous effort. It is amazing that with shovels and hessian sacks we were able to move that amount of material in just over a week. These artificial beaches will last much longer than the former ones as we have moved them away from the eroding river banks and sealed them against leaching with plastic sheeting inside. They should just need topping up and cleaning each year and so I hope that is the last of the dreaded “sand carrying” activity for the foreseeable future!

With so much hard labour we all needed to unwind and relax and after I gave the customary lecture on caimans (Crocodilians) and their natural history it was out onto the boat for a nocturnal ride up and down the river looking for any of the four caiman species we find in the area. We found several and after I caught a couple of spectacled caimans (Caiman crocodylus) and everyone got close and took photos, we all got a huge bonus. As I was sweeping the flashlight along the river banks I caught something large moving a few metres above the water line. It was a beautiful male capybara (Hydrochoerus hydrochaeris). The world’s largest rodent is an impressive animal with the biggest males easily equalling a small calf in size. However, their numbers are rapidly decreasing in areas with heightened human activity as these giants feast on vegetation along the banks of the Amazon waterways and farmers consider them a pest to their crops. The fact that the meat of the capybara is plentiful, healthy and tasty makes them a desirable dish also. In areas where there are few people the capybara abounds as its quick reproductive cycle, common to all rodents, coupled with a voracious appetite make them common sights on the river banks during the day. It was a rare sighting for us at Taricaya as farmers, fishermen and gold miners plague the rivers below Puerto Maldonado and their numbers have been greatly reduced.

Back at the rescue centre we received a new addition, a juvenile night monkey (Aotus nigriceps.). The young male had suffered the loss of the tip of its tail due to a fungal infection and its right hind leg had been broken previously but it was in surprisingly good health and whilst it struggles a little moving on the ground it is an excellent climber. Our main problem with this individual will be teaching it that it is in fact, a monkey! It has been incredibly mismanaged and had spent every moment sitting on people’s heads and shoulders. This false “imprinting” at such an early age means that we have our work cut out to reverse the damage created and convince the youngster to behave naturally. I am confident that we can achieve this and as soon as it leaves the quarantine area we will house it the newly rebuilt cage complex where its immediate neighbours will be our squirrel monkeys (Saimiri sciureus) and the two baby monkeys (howler and spider). Hopefull the reduced contact with humans and increased interaction with other primates will help reform his behaviour.

Elsewhere in the rescue centre we had to juggle some of residents’ living conditions as our southern river otter (Lutra longicaudis) perfected the art of chewing through the netting of its enclosure. We had already started a new larger enclosure for the short-eared dogs (Atelocynus microtis) and so they have been temporarily re-housed in the quarantine cages whilst the otter has moved into their former chain link enclosure where not even his strong jaws and sharp teeth can cut holes! The otter is very happy in his new surroundings as we quickly dug him a large pool and he spends all day playing in the water or just lying on his back soaking up the sun waiting for the daily visits down to the river where he swims with the volunteers and continues his familiarisation with the area. This may seem contradictory having complained about the night monkey’s dependence on humans but the southern river otter is very rare and we have registered just a few sightings in the reserve over the years and when we finally release him back to the wild I would rather he visits the lodge frequently so we can monitor his progress.

Meanwhile the otter’s old cage has been remodelled and our large Amazonas parrots have moved in. The higher roof and open areas mean that they should strengthen their flight muscles at a quicker rate and the two yellow-crowned parrots (Amazonas ochrocephala) are the next scheduled releases from the centre as the necessary blood tests have all proven negative for tropical diseases, related to both domestic and wild birds.

June saw us continue with our work at the Palma Real community and whilst it would appear that this year they do not wish to participate in the turtle repopulation project they are keen to push forward the agro-forestry project and recuperation of abandoned land plots. In short, the Ese’eja natives have cleared more and more land over the years with the increase in the community population and every few years, when the soil cannot maintain their crops any longer, they simply abandon the area and clear another plot. These disused areas have been taken over by impenetrable bamboo thickets and dense weeds and so we are slowly trying to recover these areas and show the natives how to reclaim their land and make it productive once again. We have cleared 100m transects through the undergrowth and planted economically viable plants such as fruit trees, brazil nut trees, banana plants, pineapples etcetera.. the hope is that when we can finish clearing and planting an area of about two hectares they will realise that is worth their while to recover more areas and so they clear the plots themselves and we provide aid in the form of the young saplings either from our own nurseries at the pilot farm or from nurseries in Puerto Maldonado.

I am pleased to report on great advances in our butterfly project also. We have been busy patrolling the trails with hand-held nets and fixed point traps and we have a wonderful collection flying around in the beautiful butterfly house and there are already groups of caterpillars to be found under over-hanging leaves and in the specially designed boxes. We have captured many individuals of our target species already, including the amazing turquoise Morpho sp. (Blue Morpho butterflies) and the slightly less spectacular Caligo sp. (Owl butterfly). The idea of a sustainable project whereby we breed our own butterflies for release and marketing is looking ever more feasible and Taricaya seems even brighter when the sunlight catches the iridescent wings of these stunning insects.

As I sign off now we are finishing a new bungalow to accommodate our busiest period of the year with forty volunteers at any one time over the coming weeks. The start of the turtle patrols looms and so much more to look forward to also........