It seems that each month when I sit down to start writing these updates it becomes ever more difficult to find suitable superlatives to describe the levels of endeavour and dedication from everyone involved with the Taricaya Research Centre and February has been no exception. This month we have done some extensive maintenance work around the lodge, improved our rescue centre, continued our monitoring of the reserve’s wildlife, spent many hours working on the pilot farm....and much more. 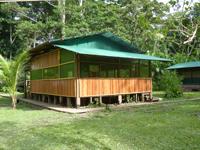 This month it was time to repair our longest standing building at Taricaya and the result is a new Animal Centre with a nursery for very young animals, a treatment room/hospital and an area for animal management and data processing. Initially we planned on simply replacing the old leaf panels on the roof but it soon became apparent that the underlying structure was too rotten to be of any use and instead we tore down everything except the floor and remodelled the whole building. The old workshop which shared the area with the old animal centre has been reduced and moved to the back of the building leaving a larger space for the animal centre. This coupled with a better distribution of the partitions and a loftier roof means that there is now a huge area allowing us to work much more comfortably with the animals. This new design has enabled us to build some detachable cages in the nursery area and our three primate residents are very happy there. Our young spider monkey (Ateles chamek) and baby red howler monkey (Alouatta seniculus) were joined this month by a juvenile saddleback tamarin monkey (Saguinus fusicollis) and the newcomer has adapted well and seems happiest chasing insects around its cage, eating the majority it catches.

Many of you will remember our exciting additions to the rescue centre last month; the short-eared dogs (Atelocynus microtis). They were feeding well but soon after their arrival the female suffered a prolapsed anus. This is a common problem amongst domestic cats and dogs and is caused most often by a change in diet and an increase in the fibre content of the food. In the case of our dogs, we are giving them a diet most similar to their natural one but we do not know what they were fed before they arrived at Taricaya and so the change of diet was the most likely cause of the problem. The only solution: an evacuation to Puerto Maldonado and a trip to the vet. When even a simple operation needs to be performed, the stakes are so much higher when the patient is one of the rarest animals on the continent and there was bound to be a tense period during the operation, noticeably a potential reaction to the anesthetic. I am delighted to report that the operation went well and with staff and volunteers caring for the animal during her rehabilitation; she is now reunited happily with the male. I believe this will not happen again as the animals are accustomed to their new diet and both individuals have a new healthy sheen to their fur and are gaining weight fast. 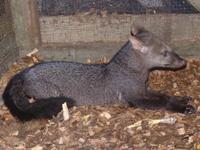 As our adult group of spider monkeys await their relocation to the pre-liberation enclosure it was time to perform the final health checks. These tests are for the three strains of bacteria known to cause tuberculosis (one human, one bovine and one avian) and whilst we as humans can only develop the disease from the human strain we can be carriers for the other two types. The monkeys can also transmit the non-human form of the disease and so it is essential to test them for all three strains before releasing them into the wild as they could become a potential source of infection for the wild fauna of the reserve. The process involves putting the animals to sleep and applying some special drops to their eyes and, as expected, all four individuals showed a negative reaction for the first strain of bacteria. Simultaneously, we tested the capuchin and squirrel monkeys which were easier as their size meant that a general anesthesia was not necessary and again the results were all negative. Over the coming weeks we shall eliminate the other two types of bacteria via a similar process. 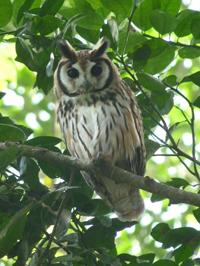 To wrap up news from the rescue centre we have been visited frequently by our resident striped owl (Pseudoscops clamator) but the encouraging aspect of its behaviour is that it has disappeared for days on end before coming back to the lodge area. This would suggest it is actively searching for a mate and is fully capable of feeding itself. This is great news and whilst we continue to supplement its diet with the occasional scraps of meat on an elevated feeding table we know that its survival is ensured as long as it evades natural predators!

With the completion of the animal centre it was time to rip up the old walkway that unites all the buildings in the lodge. The continual beating from the elements, both rain and sun, meant that the old walkway was falling apart and had become a potential safety hazard. The job was not that difficult but it meant a lot of lifting, carrying, sawing and nailing and in less than two weeks the whole network had been replaced. The wooden slats we managed to find for the job were off-cuts from the very tough ironwood tree (Dipteryx sp.). This wood is one of the densest in the world and so the lifespan of the new walkway should be even longer than the old one which lasted for almost five years. If there were any doubts as to the durability of the new material the volunteers were soon convinced by the blisters from hammering and the succession of bent nails! 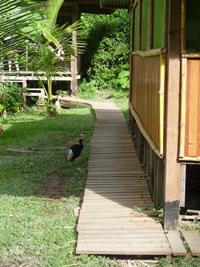 The heavy seasonal storms could not prevent us from persevering in our research into the biodiversity of the reserve and this month we found a new species of reptile for Taricaya. In this region of the Amazon rainforest there are seven known species of Chelonians (tortoises and turtles) and until this month we had registered six of them. February saw us capture three different individuals in our pitfall traps and we can now add the Amazonian mud turtle (Kinosternon scorpioides) to our list. We now have identified all known species of Crocodilians (4 species of caiman) and Chelonians for the region and this discovery after eight years of research serves to illustrate that we have so much more still to discover just within Taricaya. The continual relocation of our traps and nets to different habitats within the reserve will continue to provide us with new data and whilst new discoveries become less frequent the longer you investigate I am sure there are more surprises in store for us in our ongoing research.

This month we put up our mist nets on Sheepfrog trail which bisects two seasonally flooded depressions. This time we placed our nets from the ground level up to concentrate on birds found in the understory and despite heavy showers during the three days we captured over fifty birds including two ringed individuals, one from our banding course last year and another one from our original research back in 2005. These findings are very useful as we know that the birds are migrating within the reserve and that the dynamic of the ecosystem changes from dry to the wet season. We had never erected our nets on this trail before so the birds are definitely moving extensively through the reserve. There were no new species for the reserve this month but we caught several elusive Ringed Antpipits (Corythopis torquatus) and a male Red-crowned Ant Tanager (Habia rubica).

The continual shift between rain and bright sunlight means that the wet season demands constant maintenance on the pilot farm to prevent weeds and other pioneer species from reclaiming the area and so we have spent many hours with machetes and strimmers to keep the farm from being overrun. That said these ideal growing conditions mean that the polycultures are flourishing and every time I go to work on the farm I am amazed out how careful land management can produce so much from notoriously poor soils.

As the number of volunteers continues to increase I am certain that March will bring plenty more to report on as we are activating our butterfly traps to populate the butterfly house, planning the release of our Amazona parrots, the beginning of the release process for the adult spider monkeys and much more….