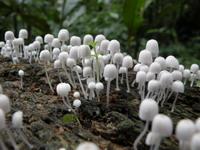 March has seen us weather yet more ferocious storms but work has continued and there is much to report on as ever. New residents have arrived in the rescue centre; construction has begun on the butterfly house, the laboratory and workshop have been built and there have been many exciting sightings around the reserve.

Our continuing partnership with the rescue centre, Amazon Shelter, has led us to receive two more monkeys at our own rescue centre. Our proven success with these smaller primates made it a logical step for these two individuals to join our larger group here in Taricaya. This move will increase greatly their survival chances upon release as we have wild groups in the reserve and numbers are essential in these troops of smaller primates as their group dynamic involves constant scanning for predators. Another factor is that Amazon Shelter is located in a heavily impacted area where the animals could easily be captured or hunted again without the protection of a larger group. The squirrel monkey (Saimiri sciureus) and white-fronted capuchin (Cebus albifrons) have made the transition well and are happy in our spacious enclosure along with our previous six residents. Interestingly in the wild, capuchin monkeys and squirrel monkeys are often found together as they move through the forest. They feed in different strata of the canopy and help each other in the detection of both food and predators.

Our baby spider monkey (Ateles belzebuth), Lilou, is also growing quickly and gaining weight every week. After initially nursing her back to health it has been incredibly satisfying to monitor her progress and she is slowly being introduced to our other juvenile female as they now sleep in the same cage and spend a couple of hours together during the day. This phase of her management is critical as she has come to depend completely on humans as she was bottle fed and looked after on a 24 hour basis. As she now starts to mature she must lose this dependency to stand a realistic chance of reintroduction at a future date. Playing and sleeping with the other youngster is therefore essential and these two will form the base of our next release group of spider monkeys as the adult group waits to enter the first phase of reintroduction.

As Taricaya continues to expand and we gather momentum in our research it had become necessary to build a spacious laboratory. With plant samples, terrariums, field equipment and data needing analysis and posting; this was the next logical step in our development. The old workshop was quickly dismantled and a sturdy second floor added to create a large weather proof area to allow us to work comfortably and with many volunteers at a time. Next month we shall build the necessary work benches, book cases and shelves to furnish the lab accordingly and all our studies can be concentrated in the one area. The ground floor will now serve as a new workshop, a staff bedroom and an open area also for working when the torrential rains and heavy storms make being in the forest unsafe. 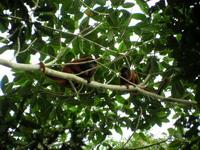 With our biodiversity studies well established and a steady flow of data now coming in we decided it was time for a new venture at Taricaya and this year we shall be tackling the world of entomology and primarily, Lepidoptera (butterflies and moths). Whilst the reproductive cycles of butterflies are well documented it has not always been easy to try and breed these animals in captivity for future release. Peru has more species of butterfly than almost any other country in the world and with over a hundred species already registered on the reserve we wish to try and create a breeding environment and pupa laboratory for some of the more endangered species. In some countries of South America, such as Brazil, certain species of butterfly are already protected and their capture for sale as dried specimens has become a huge problem. The first to suffer are the highly attractive "morpho" butterflies. Their iridescent blue wings caught in the filtered sunlight create splashes of colour in the often monochromatic green of the forest but their beauty has also led to them becoming popular with collectors and in some countries the dye from their wings has been used in the production of bank notes. Therefore at Taricaya we have decided to start studying two species of these "morphos" (menelaus & morpho) and a more common owl butterfly whose life history is well known and can serve as a example from which we can learn. With the new laboratory built we needed a butterfly house for the adults to feed and mate and March saw us ordering netting from Lima. When it arrived we wasted no time in cutting large bamboo poles and creating a giant tent (18mx9mx5m). April will see us planting gardens with the plants these species rely on for food and breeding sites as caterpillars tend not to be generalist feeders in the rainforest due to the high toxicity of many plants. 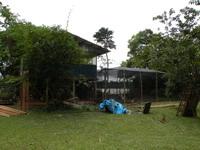 On a further botanical note, Daniel Medina continues his study of our flora at Taricaya and this month our species lists have really grown. His collection of samples and continuous efforts with complex identification keys means that we now have 234 species of plant officially identified, including 44 species of fungus and 21 species of fern. These lists will continue to grow but in just three months he has found some very interesting species which you would not always associate with a humid forest, not least of which, three species of cactus!

The call of the male howler monkey is the furthest travelling air borne sound in the animal kingdom and it can be heard as far as 5 kilometres away so you can imagine the shock when a group of six red howler monkeys (Alouatta seniculus) started an early morning call just above the dining room. The sound was literally deafening as they started to get into full swing there was not a person left asleep at the lodge. The comical element of this episode aside this a fantastic sighting for us as the red howlers are the second largest primates in the area and a favoured target for hunters. Their lethargic movements dictated by a purely herbivorous diet make them easy pickings for a keen eyed hunter and so they have become increasingly scarce. Reintroduction efforts are difficult due to the fickle nature of their diet and many animals do not survive in rescue centres. All this means that a breeding group so close to the lodge is a great sign that the fauna at Taricaya has regained its confidence in the area after serious impact before we arrived. I hope that this is a good omen as we prepare to release our first group of locally-extinct spider monkeys later this year.

April will see us complete the butterfly house, furbish our laboratory, continue with our mist netting and much more...so until then.