With the wet season finally drawing to a close and the river starting to drop it was time for a bit of damage control at Taricaya as we headed out onto our extensive trail system to assess the condition of our more distant trails that had been hard to reach previously. There was a secondary aim also as we search for a suitable pre-release site for our spider monkeys as construction may begin now that the heavy storms have passed. Our first task was to perform what we call the "Big Loop" which involves an all day hike around the perimeter of the reserve. This is always an adventure and more so at this time of year as we must cross many temporary swamps, often swimming from tree to tree! Considering the extent of the storms this year the trails were in good shape and we had to negotiate just a few fallen trees and despite being caught in a torrential downpour halfway around the circuit a good time was had by all. The walk culminated with the capture of a beautiful 3.5m snake. The Yellow-tailed Crebo (Drymarchon corais) was slithering off the trail in front of me and after a hectic chase through the undergrowth and some help from the other staff members present we were able to corner it and take some important biometric data (length, weight etc..).

At this stage I was content that the disruption to our trails was minimal and a few days clearing would see us reopen all the routes again. But later the same week as we headed out to search for an old trail we have not used for a couple of years I saw perhaps the worst case of storm damage I have ever come across. Passing the canopy and heading straight into the heart of the reserve we were heading for the main swamp and our old mammal colpa when we came across an area of maybe 3 or 4 hectares that had been completely levelled by the weather. Lightening damage is common in the rainforest and fallen trees are essential in maintaining the dynamism of the forest ecosystem as light reaches the ground and permits the continual plant succession that prevents any group of trees from out-competing others and thus reducing diversity. That said I have never seen such a huge natural clearing and the sheet lightening that struck must have been incredibly powerful. It left a lateral scar maybe a kilometre long crossing many of our trails with trees ripped apart halfway up and the falling giants had taken much of the surrounding vegetation down with them. After the initial shock had worn off it was time to get stuck in and reopen the trails that had been affected and with the routes now passable again it will be a case of time as the forest will regenerate and eventually swallow up the gaping hole. 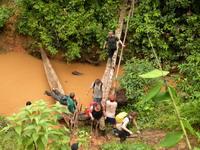 At Taricaya we always take advantage of any situation and the huge clearing will give us a golden opportunity to hunt for new species of orchids and epiphytes (plants that live in the tops of other trees) that would normally be inaccessible in the high canopy. The area is also a perfect candidate for some reforestation studies in a natural environment and later this year we shall make the most of the site to perform some new studies based away from the pilot farm.

On the topic of reforestation we have finished working on our reforestation transects in the Ese'eja community of Palma Real and now we are moving on to a much larger project to get the community fresh water. The 80 families of the community have struggled for water for a long time and a couple of years ago we proposed to help them with the construction of a dam similar to the one we use seasonally in Taricaya. After a warm initial reaction they appeared to lose interest with a prospective better offer from another organisation but, as is often the case in such matters, nothing came of the rival offer and last month they approached us again for help. This active approach is very promising as it indicates a genuine interest in receiving aid and the community had formed a committee designed just to work on getting fresh water and a formal request signed by their president demonstrated their seriousness further. Nonetheless, the scale of the proposal put it beyond our means to help financially but we were not about to abandon the community after such an effort on their part and so Fernando and I began to work our contacts in Puerto Maldonado. The local government has funds available for such humanitarian projects and we offered to take the head of the council to Palma Real to assess the need himself. After I was interviewed on local television for a second time this year I focussed on the Palma Real problem and coupled with Fernando's long standing contacts we are pushing the project forward and once the budget is approved we shall provide the technical support based on our successful system at Taricaya. Upon completion this will be perhaps the most satisfying success of our developmental projects at Taricaya as we have worked over the years to gain the confidence of a mistrusting community by our work with the freshwater turtles, rubbish collection and reforestation program. After the failures of many other groups over the years we shall be able to make a real difference to over 500 people on a daily basis!

Every month I also keep you updated on our wildlife inventories and April gave us a few great sightings as I have come to expect. First in the mist netting as we continue our study of the mid-canopy we caught a bird that we had only heard around the reserve before. The White-winged Shrike Tanager (Lanio versicolor) is a truly spectacular species usually found in mixed species flocks which makes picking them out difficult and it was a fine catch as we moved our nets along the edge of the creek. One would expect birds to be the only captures during the day but early one afternoon we had a real surprise when we found a bat entangled in the net. The fact that it was active during the day aside; it was a rare species of which we had only previously captured a female. This fine male was the largest of the White-lined Sac-winged bats (Saccopteryx bilineata) and whilst most actively hunting small airborne insects around dusk it was still very early for it to be out of its roost. It must have been very hungry or equally confused!

Elsewhere on our long trail hikes we came across many different animal tracks in the fresh mud. Having scrambled across the swamp on a recently fallen tree we were greeted by tapir (Tapirus terrestris) tracks on all sides. The reason soon became apparent as we started to clear the abandoned trail and stumbled on an open area under a dead log. This favoured sleeping place was freshly cleared and so the tapir must have been close by. Thus we made as little noise as possible and diverted the trail to avoid disturbing it as these animals, the largest land mammals in South America, are becoming increasingly rare as they are prized for their meat. I did not want to force the individual, probably female due the size of its tracks, to leave the safety of the reserve where it would be at risk. On the same walk we were able to identify the tracks of a red brocket deer (Manzana americana), white-lipped peccaries (Tayassu pecari), collared peccaries (Tayassu tajacu) and many of the terrestrial rodents such as agoutis and pacas. These findings really are encouraging as an indicator that the mammal populations are returning to their levels of many decades ago before hunters entered the area. The reserve has not reached its carrying capacity yet but animal confidence is on the rise and further justifies our efforts and the confidence placed in us by the Peruvian government. 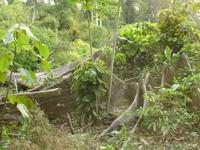 Another great sighting came on our first caiman hunt of the year as water levels had dropped to make it feasible. The caiman itself was a female smooth-fronted caiman (Paleosuchus palpobrosus) which are becoming increasingly common in the rivers of South East Peru. As I have mentioned before, I attribute this increase to a change in their dietary preferences from the historical preference of young caiman of other species to a more a generalist diet similar to that preferred by the other caiman species in the area. This coupled with their thick armour plating and aggressive nature means that they are beginning to out-compete the young spectacled and black caiman that generally inhabit the fast-flowing rivers. Nonetheless, the best part of this trip was the sighting of a kinkajou (Potus flavus) in the trees along the river's edge. Whilst not that uncommon these nocturnal mammals are very shy and their diet of nectar and flowers means that they are harder to detect than the much more active night monkeys and opossums.

Next month will see us complete the butterfly house as we work to collect and transplant the right species of plant for the caterpillars of our chosen study species, we shall be even more active around the reserve as we approach our capacity at the centre and our long standing projects will continue to operate as normal as we manage our ever growing rescue centre and press on with our wildlife inventories.....