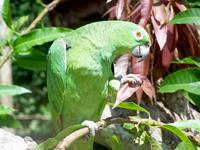 May has been another full month with plenty to report on from around the reserve and also further a field as Mauricio and I headed off to Venezuela to the VIII Neo-tropical Ornithological Conference. I shall start with my trip to Maturin, Venezuela before reporting on the goings-on back home in the jungle.

Every four years a huge conference is held somewhere in the Americas as the world's most renowned ornithologists gather to present new information, network for new study potential and to meet old acquaintances. Since the last conference held in 2003, Mauricio Ugarte and I had performed a study of the bird community at Taricaya and the mist nets we had placed around the reserve during 2005 and 2006 provided us with enough interesting results to justify presenting a paper at this year's conference. Armed with some fascinating discoveries we headed off to Maturin, Venezuela, and met with the leading members of the birding community. We presented our findings on the Tuesday evening in front of a good crowd and the ensuing questions indicated that our work had piqued the interest of many. To summarise, our work has suggested that bamboo thickets are a temporal refuge for many under-storey species during the dry season and that the abundance to diversity ratios we generated suggest that Taricaya is a very healthy ecosystem. The presence of some very rare and habitat-specific species along with many seasonal migrants makes Taricaya a species-rich area and both Mauricio and I hope to break the record of 500 species found in a reserve of 500 hectare or less anywhere worldwide. We are currently approaching 365 species but with many micro-habitats and canopy niches still to study. 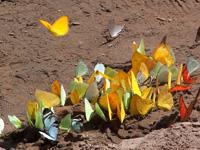 As a result of the interest generated and as a natural progression to the initial study I will be starting the second phase of the study in June as we place the nets back in the old transects as we start to study territoriality by collecting data on previously ringed birds. We will also start studying in depth the behaviour and mating activity of our most common capture, the band-tailed manakin (Pipra fasciicaudia). We will almost certainly continue to add to our species list and I am keen to get back out into the reserve and start working again with our resident birds.

Back at the lodge the volunteers did me proud in my absence and work continued as usual but not before an expedition to the world-famous Tambopata Macaw Clay Lick. As many of you know we try and head up the Tambopata at least twice a year and unfortunately the conference meant I could not accompany the group this time. Nonetheless, accompanied by the lodge staff, the volunteers headed off on the four day trip eager to see the national park unspoiled by mining and agriculture. They were unlucky in that the first day saw one of the year's first cold weather spells, or 'friajes', and the choppy river and dropping temperature made for a rough ride and little in the way of wildlife. Still spirits remained high and the second day dawned warmer and clearer and the Chuncho Colpa gave the volunteers their first glimpse of this bizarre behaviour whereby parrots and macaws eat clay to help them process poisonous toxins ingested when unripe fruits are eaten. The main clay lick, or 'Colpa Colorado', was the final campsite and whilst the still cool conditions meant that the macaw activity was subdued there was still enough on show to make the trip worthwhile. The group returned in high spirits and ready to get back down to work at the lodge. 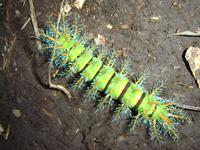 May saw us continuing with the ongoing projects around the reserve as we continue to monitor and collect data on the herpeto-fauna (amphibians and reptiles) with three walks a week. Elsewhere we continue to work at the pilot farm project and with our neighbours in the San Juan community and the extensive network of trials is being constantly monitored, cleaned and remarked. Still, at Taricaya we are always looking for new initiatives and projects as we strive to promote the area as an example for others in hands-on conservation.

In my experience, one of the best ways to generate interest in protecting a given site is to demonstrate the richness and diversity of species liable to be lost. At Taricaya we have made tremendous headway in providing such data with the bird study, the ongoing herpetology investigation and, needless to say, the daily observation activities undertaken by groups of volunteers. The data we already possess justifies conserving the area and indeed demonstrates the positive effects our work has had in the short six years we have been operating but there is still so much more to discover. We can investigate other areas of our reserve with respects to the birds and reptiles and relocate platforms to study new sites but we have new areas to consider with regards to data compilation: mammals and insects. 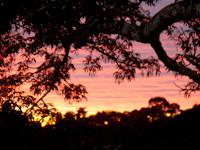 We already have a large database on the mammals found in the reserve due to our constant presence on the trails and platforms but the majority of mammal activity occurs at night when we are not generally active and so I am convinced there is a lot more to be learned about our reserve. Just this month we have had some fantastic mammal sightings including a new species for our list. Volunteers have a seen a pair of tapirs (Tapis terrestris), a Brazilian porcupine (Coendou prehensilis), red brocket deer (Mazama americana), capybara (Hydrochaeris hydrochaeris) and a first for the reserve with three sightings of a pair of southern river otters (Lontra longicaudis). The idea is to buy some cheap yet effective motion-sensitive cameras and place them at different points around the reserve. We have experimented with one already and have seen a baby ocelot we released, pacas and numerous birds. This study is easy as the memory chips and batteries are easily changed and we will start to get an insight into what happens when the lights go off!! I am waiting for the cameras to be sent from the US and will keep you posted as we start our study soon.

As for the insects, well everyone knows that this group of animals is the most diverse on the planet. The problem with studying them however is species identification as so many different species appear so very similar. Nevertheless we like a challenge at Taricaya and May saw us start to collect members of the second most diverse order of insects the Lepidoptera (butterflies and moths)- the most diverse order are the beetles, Coleoptera. To get us started we enrolled the help of a specialist from the Museum of Arequipa, Jose Cerdena, who visited us for 10 days this month. We had already placed 15 traps and under Jose's guidance we have modified their locations and altered our study plan. We have already captured over 50 species although 47 of these can only be identified as far as genus. The enormity of our task is apparent but Jose will put us in touch with the leading butterfly expert in Lima to help with our identification problems and our goal at the moment is to compile a photographic record of all the species we collect over the coming months. Jose has returned to Arequipa but we will persevere with the study and hope he can visit again later in the year to assess our progress and modify further the study design with more data available. The world record for butterfly diversity is a lodge called Explorer's Inn on the Tambopata River which is no more than 100-150 km away from Taricaya and whilst we are long way from their total of over a thousand species I am interested to see where this study leads us.

There seems to be much more I could report on but will leave it here for this month and June will see us continue with the butterfly and herpetology studies respectively; reinstall the mist nets; place our motion cameras; prepare for the start of the annual turtle project with the construction of the artificial beach and much more.