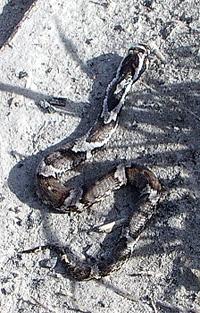 It seems like only yesterday that I was writing the last update but as usual there is a huge amount to report on from the Peruvian Amazon. Before tackling all the latest news from our ongoing projects I am proud to announce the completion of our third and fourth bungalows at the centre and I am very grateful to the more artistic volunteers who have already decorated the new constructions with fantastic jungle animals and forest scenes. The first ever building at Taricaya, known over the years as the kitchen, Dutch block, "cocina antigua"..to name but a few, finally gave up the ghost and so the new bungalows became essential as our numbers continue to fluctuate around 25. Despite brand spanking new rooms available, volunteers seem to have become attached to their existing quarters and the expected rush to fill the new buildings has yet to happen! Still with seven more volunteers arriving this week the rooms will soon be put to good use. 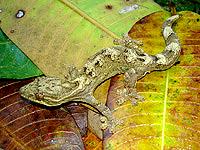 Elsewhere at Taricaya I am pleased to report that the final mammal enclosure is being completed this week. It was scheduled for completion earlier in the month but the heavy rains made working with cement impossible for a couple of weeks. So heavy were the deluges that the water levels threatened to reach the flood levels of 2003. Fortunately the water levels started to recede and both Fernando and I were mightily relieved that we were not forced to evacuate the lodge again. Nevertheless the depressions around the reserve were filled with rain water and this meant that we were limited to a series of trails not underwater! However, we often just went ahead and waded anyway and the observation walks provided us with some great sightings this month. To name but a few of the sightings, we encountered tayras (Eira Barbara)- large members of the weasel family- red howler monkeys (Alouatta seniculus), brown capuchin monkeys (Cebus apella), nine-banded long-nosed armadillos (Dasypus novemcinctus), dusky titi monkeys (Callicebus moloch brunneus) and Spix's guans (Penelope jacquacu). 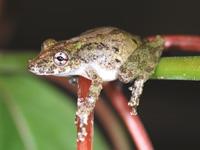 The reserve's wildlife is definitely more active this time of year as the wet season is approaching its final 4-6 weeks and so food is abundant and mothers are frantically trying to fatten up their young so that they will be strong enough to survive the tougher dry season. A great indicator of the abundance of food in the reserve is the behaviour of our most common primate the squirrel monkey (Saimiri sciureus). When food is aplenty these small monkeys form huge troops of over 200 individuals (groups closer to 400 have been recorded also) as they feed together on the fruits of the forest. These troops are formed as a defence against predation because as some individuals feed others are scanning the skies and trees for potential threats. The luxury of having such an extensive network of eyes and ears is only possible when food is common and easily found but when the dry season arrives the large troops split back down into smaller family units as competition for food is greater. Needless to say our resident squirrel monkeys are currently in large troops and are easily spotted around the reserve or even passing by the lodge!

The heavy rains have also helped us advance in our herpetology studies and again we have found some truly amazing amphibians and reptiles. New finds for our list include three new species of tree frog (Hyla marmorata, Scinax garbei and Hyla sp.), a rather chubby species of sheep-frog (Altigius alius) and a new lizard (Thecadactylus rapicauda). We have now relocated the pitfall traps and so I am confident that as we continue to investigate different micro-habitats we will also discover new species for the reserve. On the subject of reptiles I would be remiss not to mention that last week we came across the third most deadly snake in South America, the fer-de-lance (Bothrops atrox). It was just outside the interpretation centre and unfortunately I had to eliminate it as they are potentially very dangerous creatures. An unsuspecting person could easily stand on the smallish snake and hence provoke a defensive bite. These snakes would not actively attack us as we are far too large to eat and it would be a waste of their expensive venom but any animal when it feels threatened will react aggressively. 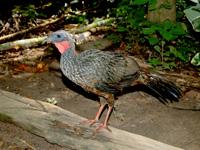 The pilot farm project is continuing to flourish and we are at last harvesting the majority of our coffee which we planted two years ago. I have been truly amazed by the amount of fruit the trees are bearing and the process of picking, peeling and toasting is one that volunteers are becoming very used to! The volume of coffee beans that our few trees have produced is a great indicator that coffee could be commercially grown in the lower regions of the rainforest as opposed to the more conventional climate of the cloud forest. This alternative income will help us keep farmers out of the forest and improve their standard of living also- everyone is a winner!!! Elsewhere at the farm our flowers continue to attract interest in town but access to Percy's flowers became very difficult with the heavy rainfall and so we made a very makeshift balsa raft to cross the chin-high swamp across his land. Amazingly the raft is still in one piece and no-one has fallen off it either. Another great piece of news is that we have another new baby donkey so both females are happy mothers!

On a fun note it was time for one of our trips to Lake Sandoval and so everyone strapped on a backpack and headed of for the overnight trip. As usual we were very fortunate and saw the very rare giant otters (Pteronura braziliensis) along with a host of herons, monkeys, kingfishers and caiman. The rope swing was a popular attraction as volunteers tried to emulate their acrobatics performed previously on our own swing over the creek at Taricaya. Earlier in the month volunteers also spent the day at Enrique's making traditional bows and arrows from palms and other jungle plants. This group of volunteers has some very good shots amongst them and I am glad that they limit their shooting to cardboard targets!!

I am looking forward to the coming months as we will start preparations for the turtle project; continue our investigations into the bio-diversity of the reserve and much more ....