As 2007 comes to an end it is time to look back on a truly amazing year here in the Amazon with numerous successes, various new projects and also some mistakes to learn from. Still it is perhaps the final piece of news from this year that gives me the most pleasure to report. Reserva Ecolgica Taricaya is now the first official animal sanctuary in Peru. 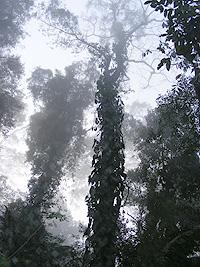 We had visits from government officials and vets this month and they were so impressed with the infrastructure at the lodge and the health and vitality of our rescued inhabitants that they pushed the paperwork through surprisingly quickly by Peruvian standards. Just last week we were officially recognised as the first institution legally able to receive confiscated animals and release them back into their natural habitat. As many of you know we have been unofficially operating with dubious verbal consent from the authorities for several years but we were never able to expand or corroborate with other interested parties as the permission was never official. Heads of department in Madre de Dios were unwilling to risk sanctioning a new program and so we were stagnated for a long time. But at Taricaya we never throw in the towel and after many trips to Lima, constant badgering and several heated discussions we have finally achieved the well-deserved status of "animal rescue centre". This fantastic news is a tribute to the hard work of everyone involved with Taricaya over the last few years and I thank everyone who had a part to play be it large or small.

December saw us bid farewell to a resident of the rescue program as we released our brown capuchin monkey (Cebus apella) back into the wild. It is always very satisfying to release an animal back into its natural environment and this was no exception. The young male disappeared off immediately and has undoubtedly united with one of the several wild troops we have seen around the reserve. We also released a slightly more dangerous resident this month too! We had a rescued a two metre boa constrictor (Boa constrictor) in Puerto Maldonado that had been found out the back of what used to be Brombus. It was about to be killed by the workers clearing the area as their lack of knowledge leads them to consider all snakes potentially lethal to humans. Fortunately we heard the commotion and managed to prevent the unnecessary slaughter and I had the pleasure of releasing this 10 kilo monster after it had become well and truly irritated by its journey down river in a sack. It was not the easiest task; extracting the serpent from its temporary home but finally I got it out and after measuring it, released it near the creek. Hopefully it will discover that there are plenty of rats and mice to be had around the animal enclosures and will become part of our pest control system! The other residents in the program are all in excellent health and I am confident that the start of 2008 will see us able to release several of our longer standing residents. The yellow-ridged toucans (Ramphastos culminatus) have tripled in size since their arrival and are improving the flying skills constantly. The yellow-crowned parrots (Amazona ochrocephala) are also almost ready for release as are our night monkeys (Aotus sp). This is great news as we will be releasing some of our longest standing inhabitants which is always greatly satisfying but also we will be needing the space as we ready ourselves for the influx of new animals with the new permits we have been granted. 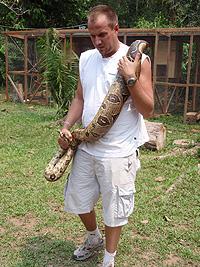 Another great piece of news to round off the year is the completion of our latest construction- the new dining room. This building has taken a while to complete simply due to its size and painting it alone has taken us almost a month. Still new volunteers arriving next month will be welcomed by this fantastic new building with its balcony overlooking the river and much more space inside for eating, relaxing or escaping from your roommate for a while!

Elsewhere at Taricaya we have been working hard on the farm as the first storms always leave a wake of destruction behind them. We needed to re-open the lines of heliconia flowers, clear the coffee and cocoa plantations and cut back the open areas around the mahogany saplings. It was hard work under an unusually hot sun but over the last few weeks we have managed to finish it all and the farm is looking very healthy and green thanks to the first heavy rains and the hard work by everyone to clear all the debris and cut back the encroaching jungle! We have also been able to harvest the cocoa this month and the lodge has been filled with the wonderful smell of freshly made chocolate as we sampled the first batch ourselves.

Many of you will recall that the aim of the pilot farm is to encourage our neighbours and other local communities to get involved with our program and thus help themselves improve their standard of living whilst simultaneously reducing their impact on the ecosystem. This ideal is one that we have had since the creation of the farm but as you will recall it has taken a long time for people to come to trust us after previous disappointments with other organizations. This month we have had two very positive requests that have made all the hard work worthwhile. Firstly our neighbours across the river in the San Pablo community have requested flowers and coffee plants for their farm. Pedro has been working with us for a couple of years now but he was only interested in livestock so we helped him with guinea pigs, sheep and donkeys. However, he has seen our successful flower production at his neighbour's farm (Percy's) and he now wishes to get involved in this area also. This is very encouraging and a just reward for our patience in building up local confidence. Nonetheless, we still had to transfer the saplings from our farm to his and this was very hard work under a blazing midday sun. Still, as usual, no-one quit and after two days of hard work we had transplanted over 500 bulbs onto his farm and now the rains should help them establish roots quickly. The second piece of good news concerns the Ese'eja community of Palma Real. We have been working with the head of the community in developing some projects for next year in conjunction with the local council and they are very excited about working with us. Still it was a pleasant surprise to be invited to the community's anniversary at the start of this month and we all headed down river for a day of festivities that included a football competition and some cold beers!

Another great accomplishment this month has been the completion of our trail map using GPS. This has been a laborious task and the weather often foiled our efforts as thick cloud-cover would block the satellite signal. Still, perseverance paid off and we now have our trail system completely mapped out and every 50 metres of trail has registered co-ordinates. I am enclosing an artistic version of the new map and this will be blown up and posted at the lodge and smaller copies printed for volunteer use.

I guess that brings me to the end of 2007 and it just remains for me to thank all volunteers and staff who have helped make this year so successful. At Taricaya we pride ourselves on our determination and creativity and 2008 promises to bring us yet more challenges and new ideas. I am sure our new batch of volunteers will continue the tradition of hard work and it just remains for me to wish you all a Happy New Year and a prosperous 2008.