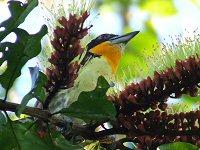 Unbelievably another month has flown by and as usual I am very excited to report on our latest goings-on from the depths of the rainforest. July in previous years has seen our numbers start to fall off but not this year. In keeping with the increased interest in the project, we had record numbers for July this year and this enabled us to keep the momentum going with all the projects currently running at the lodge. Last month I mentioned the final conditioning of the parakeet aviary and the herpetology project as major focus points for this month and true to from volunteers and staff alike have laboured successfully to achieve these goals.

The octagonal enclosure I designed for the parrots and parakeets meant that we could manage several species separately whilst having a central pen into which we could selectively release birds so that they might exercise their wasted flight muscles. Mixing species together in an aviary often leads to bullying by the larger individuals and so the new design means that species are separated into the 7 smaller cages each with a door opening into the central aviary. Now we can manage the birds all in one area but without housing different species together. I am pleased to report that the system seems to work exceptionally well and the new residents in the enclosure are very happy. We currently are housing two yellow-crowned parrots (Amazona ochrocephala), a mealy parrot (Amazona farinosa), a blue-headed parrot (Pionus menstruus) and two cobalt-winged parakeets (Brotogeris sanctithomae). The latter are almost fully recovered and I suspect I will be reporting their release in the not too distant future. 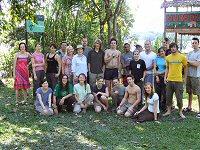 You will recall that we have been housing razor-billed curassows (Mitu tuberosa) for some time now and their rapid recovery was mentioned in a report earlier this year. Sadly, I have to report the loss of one to an unknown predator. One morning the group responsible for feeding the animals found one of the trio dead in the corner of its enclosure. It appears the bird had decided to sleep right up against the netting and the hunter, almost certainly a cat, managed to maul it through the netting. Obviously having killed the bird the predator could not remove it, as it was still inside its enclosure, and by studying the nature of the injuries the curassow received I am convinced the killer was feline. The reserve has given us many sightings of cats over the years but I would not be surprised if the culprit were not an old acquaintance of ours, the elderly puma (Puma concolor). In 2004 our neighbour's livestock suffered over a three month period and I myself had a very close encounter on a night walk with the same individual. The reappearance is just a sign that it is reclaiming its former territory and apart from the sad loss of the curassow it will be impossible for the cat to harm any more of our animals all safely ensconced in the new cages we have completed over the last six months. Let's hope we get some sightings of the puma over the next few weeks!!

On the subject of sightings I would be remiss not to mention some of the great encounters from recent observation activities. The group that were startled by a falling branch next to trail only to find a two-toed sloth (Chloepus hoffmanni) attached to it can probably claim the most bizarre sighting but elsewhere we saw some great birds from the canopy not least a gilded barbet (Capito auratus), a new species for the Taricaya bird list, and paradise tanagers (Tangara c. chilensis). 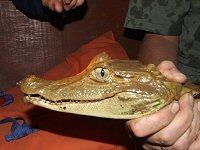 As you are probably aware, August sees us start the annual turtle project and so volunteers and staff have been busy preparing the artificial beach; an arduous task transporting sand form the river shore up to our chosen incubation site. Still we are all set and ready to start our collection phase at the beginning of next month. On the subject of reptiles we have been continuing the herpetology project left us by Daniel and daily groups have been checking the traps for unwary individuals. The diversity of amphibians found in the reserve has surprised me, I expected positive results but so far the findings are looking even better than I had thought.

As the number of volunteers, past present and future, continues to rise I am justifiably excited with the speed that we are accomplishing our goals. If that were not enough I was very pleased to welcome an old friend of mine, Jacob Lowe, from the US who has agreed to help us market Taricaya in the States. His 10-day visit was very useful and I am confident that he will drum up business for us wherever he travels. However, we decided to re-live our time as guides and try to catch some of the larger caiman on the river. I often take volunteers out to show them caiman and help dispel a lot of the myths surrounding them. Anyway as fate would have it these modern-day dinosaurs were not in a co-operative mood and a particularly feisty spectacled caiman managed to latch itself on to my arm!! Still as it would not let go it was a novel technique for capture if not a recommended one. No real damage was done and good fun was had by all (maybe slightly less by me!!!)

I look forward to the turtle project amongst things in August and will be sure to keep you all posted on current events at Taricaya.