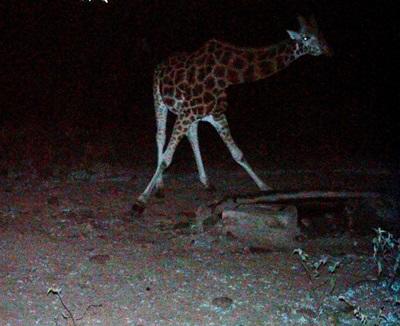 The Conservation project in Kenya has been moving from strength to strength with the support of a dedicated team of volunteers and staff. The ongoing giraffe research, in partnership with the Giraffe Research and Conservation Trust (GRCT), is going well with 25 giraffe surveys already totalling to 201 and 156 giraffe observations in the month of February and March respectively.

The population are doing well, apart from the sad news that we lost one of the adult males who was found strangled by the fence. The giraffe managed to get out of the conservancy through the fence, but was caught by the wire in an attempt to get back.

The research on the activity pattern of the endangered Rothschild’s giraffes is still being undertaken in the conservancy by our team of volunteers. In the month of February and March a total of 69 giraffe observations were made, from 18 field studies. Although this was the most difficult months in that the giraffes were wandering far to forage, because of the dry season scarcity of browse foliage.

Total dry count conducted in the month of February by Projects Abroad volunteers, staff and the conservancy rangers yielded the following results: 50 Warthogs, 1 Cerval, 3 Dikdik, 1 Eland, 4 Giraffe, 3 Hippo, 259 Impala, 2 Jackal, 23 Guinea fowl flocks, 1 Monkey, 10 Thomson gazelle, 14 Waterbuck and 37 zebras. The study covered approximately 70% of the entire study area, the other areas was not counted due to the terrain and low visibility as a result of the thick vegetation.

The most recorded bird species is the Common Drongo other species which seem to be common are the Common Bulbul, Superb Starling and Crowned Plover. The most observed bird of prey was the Augur Buzzard. The migrants birds have still been spotted in the conservancy, this include the Willow Warbler (Phylloscopus trochilus) and the Amur Falcon (Falco amurensis) a Palearctic migrant which occurs in this region in November to December and March to early May. 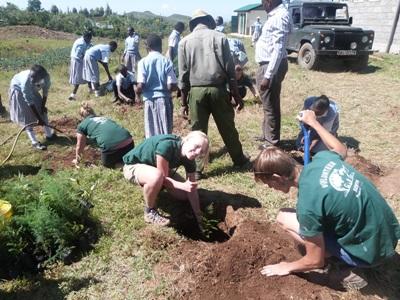 Our tree planting and agroforestry programme is on-going with the aim of restoring the crucial lake Naivasha catchment by increasing the percentage tree cover and providing sustainable fuel wood for the community. Tree planting also is very crucial in the mitigation of climate change which is a global threat to sustainability. This tree nursery now produces trees for reforestation efforts on surrounding communities and school. The Acacia xanthopholea which is one of the native plants in this ecosystem and which we propagate to grow in the conservancy are doing well. The biggest challenge though is the low germination rate, though they will be ready for planting in the next month within the conservancy.

With February and early March being the hottest months in the year, we had lots of challenges in that the saplings needed plenty of water and time in the nursery. We actually lost some seedlings to the dry weather. Late March is when it started raining and the tree planting commenced in the Catchment. We had a big tree planting event in Nyamache primary school and Nelson Dispensary we were working in a partnership with the Rotary Club of Naivasha among other organisations.

We planted over 1000 trees in an area that was severely damaged by deforestation and doing effort to reverse the harm we are cause on the environment. We have also planted over 2000 trees in the neighbouring Woodard Langalanga and Langalanga primary school in the ongoing project of greening schools.

Night carnivore monitoring is on-going we conduct weekly night animal game drives, this is so far we have counted over hyena and the clan has two new born babies over 2 months old. The juveniles have been spotted going on hunting expeditions with the adults. We still are looking on the possibility of using call –ins (call back) to count the hyenas and the jackals in the near future. 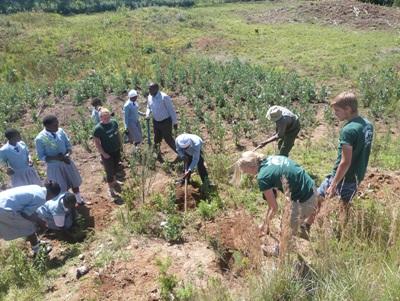 Poaching incidences were not observed, this is due to volunteer and rangers efforts in patrolling and reporting cases which helped the management of the conservancy to act. This has helped in curbing poaching and so the warthog population are safe for now.

Perimeter powered fences in ‘islands’ conservation areas are important in that they keep poachers away and wildlife inside safe haven, but the recent cases of a giraffe getting strangled in the fence is one of the problems and challenges in fenced ecosystems. This has led us to increase the fence patrols from thrice in a week to daily so volunteers are needed to help in this course.