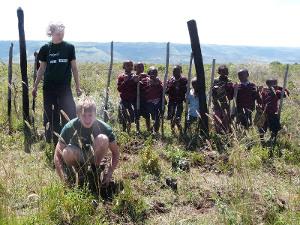 Before reporting on our latest activities in the Kenyan bush, I would like to give you a little background on the work we are involved in.

Projects Abroad Kenya applies concepts of conservation through the involvement of volunteers and the locals by funding the application of sound wildlife management and ecological practises. Kigio Wildlife Conservancy was once a cattle ranch, which has since been transformed into a wildlife conservancy. The conservancy is home to a wide variety of wildlife, including 4% of the rare and endangered Rothschild’s giraffe and hosting two of the big five – leopard and buffalo. As Kigio Conservancy is home to a significant percentage of the endangered Rothschild’s giraffe (Giraffa camelopardalis rothschildi), Projects Abroad has partnered with the Giraffe Research and Conservation Trust (GRCT) in pioneering a study that link up these two critical areas of Kenya, all following the same methodology. 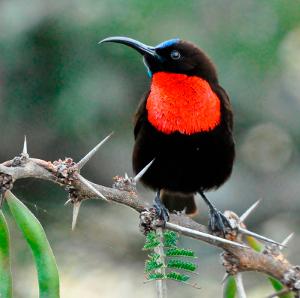 The International Union for Conservation of Nature (IUCN) recognises that this species is declining and without extensive conservation measures it will inevitably fall into the critically endangered bracket. The number of Rothschild’s giraffes left in the wild is estimated at around 670. To counteract this decline further, research is required into the ecology of this species and its requirements in the wild along with the factors causing their decline.

The overall aim of this project is to provide an accurate and scientific overview of the ecology of the Rothschild’s giraffe. The data collected will replicate data collected by the Giraffe and Conservation Trust (GRCT) within the Central Rift Valley. The on-going giraffe research in Kigio Wildlife Conservancy is monitoring a total of 22 adult giraffes and four calves, with each of the giraffes having its own individual identification kit. This monitoring programme will provide information on the principal browsing behaviour and a detailed overview of the diet and the key ecological requirements of the Rothschild’s giraffe.

Giraffe populations are monitored using an individual ID-based approach in the conservancy. A research team of three to four volunteers is driven through the conservancy trying to cover as much ground as possible during each monitoring period. Typically a total of six surveys are conducted every week, equally split between the morning and afternoon. The monitoring team records a set of standardised parameters for each individual sighting, including: identity, time and date, GPS location (UTM Coordinate system), group composition, behaviour, age and sex. Photos of each individual giraffe were taken and used for identification as well. Individuals were recognised by a combination of several features: skin pattern, distinctive body marks, age and sex. All data was recorded on a standardised data collection form, which was later entered in a giraffe data base. 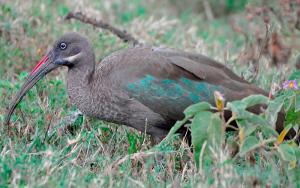 In addition, these surveys also covered the feeding behaviour of the giraffes by identifying and recording the plants that were being fed on. The diet was assessed and species contributing 5% or more to the diet will be considered principal forage.

While the IUCN recognises the Rothschild’s Giraffe as a vulnerable species, hardly any research has been done on this sub-species in the wild. It is important for this sub-species to be researched more thoroughly because the differences in displayed behaviour due to absence or presence of predators are not known. This information is needed to make sound population management decisions, especially when giraffes are trans-located. Research in Kigio Wildlife Conservancy is interesting because of the absence of lions, probably the main predator of giraffes and the fact that each single giraffe in this area is well known. The aim of this study is to discover how Rothschild’s giraffes spend their days without real predation risk. Besides that, this research will be done to find out which factors influence displayed behaviour. 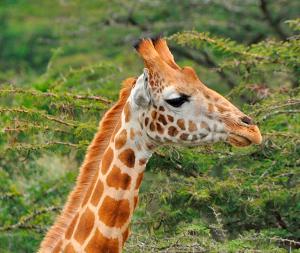 For this research, each session takes 12 hours. The 12 hours is divided into four shorter shifts, with a two hour delay in between. In total, each shift takes 4 hours and 30 minutes. During the shifts, the behaviour of the giraffe is recorded every 5 minutes using a technique called “scan sampling”. The start and stop time of a session should be different each time in order to obtain a 12 hour cover in the dataset. Because of the identification of the giraffes, it is possible to give exact information on the age, sex and if the females are pregnant or not.

During August and September almost 194 hours of behavioural observations were carried out by the volunteers. The data shows that giraffes spend most time on feeding, as 31% of observed time was noted as feeding behaviour. 17% of the time the observed giraffes were not seen, which is mostly caused by them walking away from the view of the volunteers. When giraffes are not feeding, they spend most time ruminating, transiting or standing, which together make up 44% of all the observations.

However in Kigio we do not just study the giraffes and it is important to understand the population dynamics of other species living in the conservancy. Bi-monthly animal counts are conducted six times a year to help us ascertain the abundance and population structures of all the local wildlife. Within the conservancy there are many species of mammals, many of which have yet to be positively recorded. Camera traps are a valuable means by which to survey secretive wildlife and elusive animals as they are non-invasive, effective and can be deployed for long-term studies. This technique is of great importance in the study and inventory of nocturnal and shy animals, especially leopards, hence the importance of the study in this conservancy. In order to achieve a more complete and reliable view of the conservancy’s wildlife the results of this study are combined with a survey on animal signs, mainly tracks and scats, which is conducted on a bi-monthly basis. To date we have captured 18 different mammal species on camera and these include the leopard (Panthera pardus), buffalo (Syncerus caffer spp.) and serval cat (Leptailurus serval). 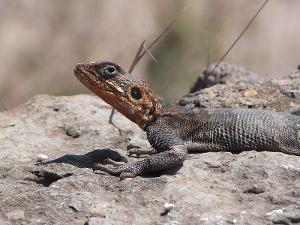 Our biodiversity studies do not stop with mammals and over the last few weeks we have been researching the birds of the reserve. To date we have recorded over 50 species of bird and we must now process these names and prioritise those on the IUCN red list (endangered/threatened) for further research. Our sightings included the magnificent long-crested eagle (Lophaetus occipitalis) and the brightly coloured amethyst sunbird (Nectarinia amethystine). In addition to diversity we are investigating species abundance and our most common sightings included the ring-necked dove (Streptopelia capicola), common drongo (Dicrurus adsimilis) and crowned plover (Vanellus coronatus).

Our tree nursery project, started last year, is running extremely well and we hope to cultivate more than 30,000 trees annually for reforestation efforts in surrounding communities and local schools in a project entitled “Project Green”. The selected species have many functions, such as timber, food stuffs, strong roots for erosion control and medicinal properties. To date we have planted our saplings in several neighbouring schools, such as Mwega and Ngumo primary schools. These activities get us involved with the local community and, more importantly, with young children whose generation will be responsible for the conservation of the area for many years to come. 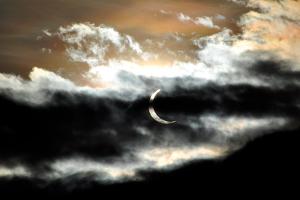 Illegal hunting of bush meat is one of the major contributors to biodiversity loss and species extinction in Africa and has been a major challenge in wildlife conservation inside and outside of Kenya’s protected areas. The driving force has been the need for cheap source of protein and hence trade in wild meat. Kigio Wildlife Conservancy borders human settlement in the north where there is a great need for a cheap source of protein. As a result, poaching can be an attractive method for some to attain game meat. Warthogs are the main species targeted because they are easy to hunt as they live in small burrows. The human settlement in the north has pushed away wildlife to the west and further from them hence Kigio is the nearest sanctuary for persecuted animals. This month volunteers have been tracking poaching activity and when a breach was found in the conservancy fence the Kenya Wildlife Service was contacted. Based on this information an individual poacher was apprehended soon afterwards and prosecuted by the law.

As you can see we have plenty of work on the project and as we collect more data our understanding of this wonderful ecosystem increases. As more and more volunteers come to join us, I look forward to reporting on more successes in the future.